My apologies to everyone who has been waiting for the first real post.  It's coming, I promise.  I just need a little more time, as I hadn't intended on the start of the year being as hectic as it's been.  In the meantime, if anyone has anything to contribute, feel free to do so!

Thanks for your patience, it will be rewarded.
Posted by History of A&P in New Jersey at 11:45 AM 2 comments: 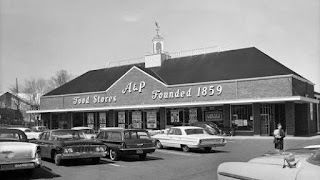 For more than 150 years, The Great Atlantic & Pacific Tea Company was a significant part of America's retail landscape. Despite it having ceased operations in 2015, its rich history promises it will not be forgotten. The purpose of this blog is play a small part in the celebration of that history.

I've been toying with the idea of a project like this for quite some time and would be remiss if I didn't mention the webmaster/owner of Acme Style for serving not only as inspiration but providing an incredible amount of advice and guidance (including the permission to use a format that works very well for this sort of thing). If this turns out anything like that site, I'll consider this one a success.

Speaking of which, all of you readers have the ability to play an important role in the growth of this website. While I'm not afraid of the hard work of coming up with content, I can't do it alone. If you have photos, information, or stories (or all three) about A&P stores and your experiences as shoppers, feel free to send them so I can either add them to existing posts (coming soon) or get started on something new.

Why New Jersey? First, it's my home area, so I can get to most parts of it without much effort. Second, it played an important role in A&P's history. While the company once reached from coast to coast (hence its official name), New Jersey was one of the few states where it maintained operations until the very end. From 1974, the corporation was also headquartered in Montvale, having left its longtime home in the Graybar Building in Manhattan. Finally, it's rich with locations to investigate.

Hundreds of towns across the state feature former A&P stores that have been repurposed in countless ways. There are also dozens that survived until the very end and are now beginning new lives. We have a unique opportunity to document what happens to these buildings as they transform into other grocery stores or even evolve into things entirely different.

The focus will be A&P stores in New Jersey but this website won't be so rigid as to exclude others. There will be times we can take a look at ones outside of the state if they're interesting enough to warrant a post. And while A&P is featured in the name of the site, there will certainly be opportunities to examine other stores that existed under the company's umbrella. After all, New Jersey was home to a lot of Pathmark and SuperFresh stores, the latter now a banner for Key Food along with another former A&P brand, The Food Emporium.

Bear with me through the learning process and growing pains that will surely define these first few months, especially as I work around other parts of my life. With your input, we'll determine the best way to deliver information. Right now I am imagining a single post for each location that enlarges over time with new photos and information, but time may tell that may not be the way to go. We'll see.

In the meantime, welcome!
Posted by History of A&P in New Jersey at 8:20 AM 9 comments: